This week has been about (1) trailing ftrack, (2) testing Paperspace and (3) on-boarding the team I’ve been putting together to help make this pipeline best in class. To this date I’m in conversations with Colorbleed, MetaPipe and Alexander Richter. The goal is to accelerate and future-proof development as well as extend the horizon of what is possible.

Strengths are first-impressions and intended to change as I get a better sense of background, experience and preference of everyone involved.

Things are looking sharp and the communication between your current pipeline and ftrack is straightforward - ftrack will take on the responsibility managing users, their tasks and schedules.

Alan spoke of a good candidate for first production use last week that I’m aiming to see in there next week, at that point I’ll be able to have data sent to ftrack as we publish, and read from ftrack as we create and assign tasks. I’m thinking publishes will take the form of playblasts that we can review and for tasks to become visible to you via the Launcher.

I spun up 12 new machines with Quadro M4000 GPUs and off we went. We’re three days into testing, and are expecting to keep testing for another 11 days for two weeks total.

Aside from the benefits listed in week 10, we experienced a significant latency for users in the Sao Paolo region and barable latency in Sweden.

Another thing was user management.

Google File Stream enables direct read and write to Google Drive within which we are able to host our internal NAS during the transition onto the cloud, after the plan is to use the cloud-provided NAS of 8x the performance. But since the user account got disconnected, so did the drive which disable write-access for the Launcher and thus no tasks to be started.

The set-up was complex enough to stir up trouble even for the most technical amongst us, so I had a look at “Team Drive”; a Google Drive “NAS” in which the share could be set-up once and mounted via Google File Stream as-is and viola, individual access, with administrator permission control per user and no set-up required.

We finally managed to move our Google domain name from mindbender.se to mindbender.com as well, but that meant we lost access to our early-access account to Google File Stream which meant no more access to this until a new account is granted.

So what will happen is that I, or someone capable (looking at you Peter!) set’s up a plain old Google Drive on the cloud NAS, Z:\. At that point, all should be working normally apart from the occasional synchronisation issues of duplicate files and such.

In order to identify and balance goals and jargon amongst each of us involved, I’ve put together a shared document in which we define our target audience, ideas and roles. The goal of this document is for us all to find a common ground upon which we can build the final product. 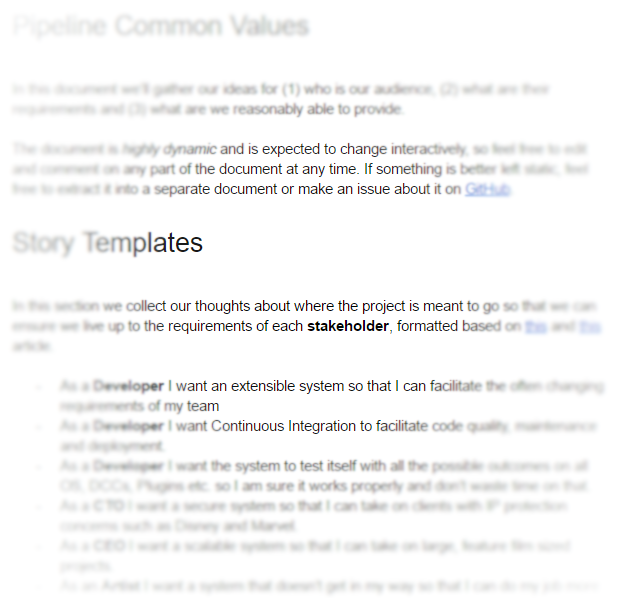 The document will also serve as a reference to future developers joining at a later stage, for them to understand our initial reasoning and goals.

This week I also introduced the notion of priorities, which is how (1) I will reflect what I’m currently busy and how (2) you can indicate what you find most important. This also means that if you think something is important but it isn’t on that list, it will most likely not happen in time. This way participation is both encouraged and lack of it punished, fairly. :)

In addition to onboarding, me and Calle have plotted the course ahead in the form of more specifications on GitHub, below are some highlights.

I’m very excited for you to get ftrack set-up for use in production and do more work in Paperspace so we can either make the transition as soon as possible, or decide not to at which point I will return to implementing safe synchronisation for all.

While this is happening, I’ll be continuing to onboard additional pipeline developers in the hope that time lost now is regained once we’re all up to speed. I expect a merge to happen with Colorbleed, which should provide a number of additional features for us, including better Loader organisation, project management and Manager features. They’ve got some ideas on set dressing as well that we can hopefully all benefit from.